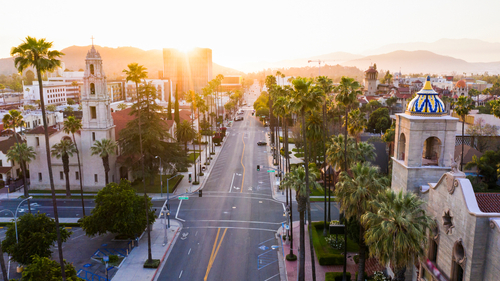 The Golden State of California is rich with culture, beautiful landscapes, and some of the most exciting educational opportunities in the world.

California has several of the best small colleges in the United States. Most of them are private universities, so they cost the same whether you’re from California or not. There’s only one public college in this ranking of the best small colleges in California, but it hangs in there with the best colleges the state has to offer and does so at an incredibly low price for CA residents. If you’re looking for small colleges in a sunny place with great weather that’s close to both beaches and national and state parks, then California just might be the perfect place to find what you’re looking for. And the best part is, you won’t have to sacrifice quality for an incredible location. You’ll find several different kinds of colleges and universities to choose from in our ranking. You have a top 10 university, several top national liberal arts colleges, a Christian liberal arts school, and one of the only maritime academies in the United States. No matter what you’re looking for in a small college, you’ll likely find it in our ranking. So have a look, and see if any of these schools seem like a great fit!

Harvey Mudd College is one of the top liberal arts colleges in the United States. Harvey Mudd is a pioneer of the STEM-focused liberal arts program, and its graduates enjoy the second-highest 20-year net return on investment among all colleges and universities in the country, losing out by only a few thousand dollars to MIT. Harvey Mudd is one of the best examples of a school that grants you all the benefits of a small college without requiring you to sacrifice anything. The acceptance rate of just over 13% may seem low, but that’s roughly twice the acceptance rate of schools like Cal Tech and MIT.

California Institute of Technology is the most selective small college in our ranking, accepting just 6.4% of applicants. This elite school is on the same level as schools like MIT and Stanford in its STEM programs, but it has a student population of under 1,000, a quarter that of MIT and one seventh that of Stanford. The student-to-faculty ratio at Cal Tech is probably the lowest you will find in any school in the United States at just three to one.

Claremont McKenna College is a top-ranked liberal arts college in the United States. The school has an undergraduate student population of 1,343, and an eight-to-one student-to-faculty ratio. Claremont McKenna admits 10% of applicants. Claremont blends the cozy feeling of a small college with the advantages of a mid-sized college by enabling its students to network and work with students from other highly regarded liberal arts colleges like Harvey Mudd College, Pomona College, Scripps College, and Pitzer College, all of which are also featured in this ranking.

Pomona College has an undergraduate student population of 1,447 and a seven-to-one student-to-faculty ratio. It’s a top-ranked national liberal arts college and one of the most selective colleges in our ranking, admitting just seven percent of applicants. The college was established in 1887 and features 48 majors in the areas of the arts, humanities, and social and natural sciences. Though the student population is small, it is diverse, with students from 61 nations, 49 U.S. states, Washington D.C., Guam, and Puerto Rico.

California Maritime Academy may not strictly be a military academy (94% of graduates go into the private sector), but it does have that vibe. Students wear uniforms, and the school’s close historical ties to the military mean the school does share some values with the military. About eight percent of students graduate as commissioned officers in the military. 94% of graduates from Cal Maritime land a job within three months of graduation, which is one of the best rates of employment among all colleges in the United States. The school offers programs in business administration, global studies and maritime affairs, marine transportation, mechanical engineering, facilities engineering technology, marine engineering technology, and oceanography. While CSU Maritime is comparable in quality of education to other top small colleges in our ranking, the incredibly low price and the acceptance rate of 76% help it stand out as both high-quality and accessible.

The average class size at Occidental college is just 17 students, which is remarkable even for a school with a nine-to-one student-to-faculty ratio. At 1,985 students, Occidental College is one of the largest schools featured in our ranking. So if you want a small college, but not too small, this is a great choice! Occidental College is a top liberal arts college, but unlike many top liberal arts colleges, it accepts around 37% of applicants, making it much more accessible. For students who want practical, hands-on experience, the InternLA program provides hundreds of students with the opportunity to engage in paid summer internships with companies and organizations in the Los Angeles area.

Scripps College is another top liberal arts college in the LA area. Scripps is another of the more accessible liberal arts colleges, accepting 32% of applicants every year. The student population is just under 1,000, and the student-to-faculty ratio is 11 to one. Scripps was founded as a women’s college and remains one of the few women’s colleges not to become coeducational to this day. The school is 100% women, 41% students of color, and five percent international students. Scripps has a transgender-inclusive admissions policy, meaning transgender women can feel free to apply without worry. Government documentation is not required to verify sex or gender identity.

Dominican University of California was founded in 1890 and offers over 60 majors and concentrations. The school has a 10-to-one student-to-faculty ratio, and the average class size is just 16 students. Students who want to study in other countries may be interested in the 60+ study abroad programs. Its business programs are AACSB-accredited. Its location in the San Francisco Bay Area means it is perfectly positioned for students who want to take full advantage of its proximity to Silicon Valley.

Pitzer College is another of the many liberal arts colleges in and around Claremont, California to be featured in our ranking. The school has a 10-to-one student-to-faculty ratio and just over 1,000 undergraduate students on campus. The school admits 14% of applicants, and it is a member of The Claremont Colleges, an affiliation shared by the numerous liberal arts colleges in the area. It provides students of the schools with the small liberal arts school environment they want, without sacrificing the advantages of a higher student population.

Westmont College is a Christian liberal arts college located in Santa Barbara, California and has a student population of 1,317 with a student-to-faculty ratio of 11 to one. Westmont admits 65% of applicants, making it one of the most accessible schools featured in this ranking. The school is not directly tied to any single denomination. The school has students hailing from 25 states, 11 different countries, and 33 different Christian denominations. 87% of students graduate within four years.

There are so many liberal arts colleges in this ranking, how do I choose between them?

Superficially, they all look pretty similar. Similar tuition rates, high graduation rates, good return on investment, nationally ranked. But each of these colleges has its own distinct culture and academic approach. One is a women’s college, one is a Christian college. Some are difficult to get into, as demonstrated by their low acceptance rates, and some are much more accessible. Some put an emphasis on global perspective and seek to facilitate experiences abroad for their students. Some might emphasize STEM, while others might hold to a more traditional classical liberal arts structure.

Many of the colleges on this ranking (Pitzer, Scripps, Pomona, Claremont McKenna, and Harvey Mudd) are affiliated with each other. Which means if you get into one of them, you can participate in activities, research, and more at the other colleges in the group. What this means is that you get all the close-knit community and opportunity of a small college, but you don’t have to sacrifice many of the amenities of a mid-sized college or university.

Plus, while there are many liberal arts colleges featured in this ranking, don’t be quick to dismiss the other schools. CSU Maritime is an incredible institution for anyone who wants to study anything related to the ocean and/or seafaring. CalTech is up there with MIT and Stanford as one of the best STEM colleges in the United States.

A lot of these colleges are pretty expensive. How can I pay for them?

Thankfully, the return on investment at a lot of the schools in this ranking is pretty high, so even if you end up taking out a little more than average in student loans over the course of your education, the college’s reputation, strong internship programs, and alumni networks can help students get great jobs that will hopefully help pay off those loans quickly. Our advice would be to apply to as wide a range of colleges as possible and then weigh the pros and cons of attending each one once you know what the real cost will be.

Why is graduation rate important?

Well, graduation rate is a good indicator of how well students are supported during their academic journey. High graduation rates are achieved through a few strategies. The first is to admit students that have a proven track record of academic achievement. This ensures the students are capable of meeting the demands of the college. However, many colleges have more open admissions standards, and these are the ones where graduation rate can reveal something really special. If a college accepts 50%, 75%, or more of applicants and still maintains a high graduation rate, this is a college that has the ability to help students who may not be as academically gifted as the students at schools who only accept the top few percent of applicants. Either way, a good graduation rate means you can be confident that if you’re accepted to the school, and you put in the necessary work, there is a good chance you will graduate.

Each category is weighted as follows.

For the national and regional scoring categories, they can only apply to one school at a time. Regional rankings are scored at ⅔ the value of national rankings, as the schools only have to compete for these rankings against a few schools in their specific region that are not already nationally ranked.

Other articles of interest:

This concludes our ranking of the top 10 best deals on small colleges in California.